Weboftheworld Wikia
Register
Don't have an account?
Sign In
Advertisement
in: Humans, Zosimus family, Children of the War, Orphans

During the War of Succession, when the Zosimus family was ruined due to having supported the losing side, Vincent became a wandering minstrel. Eventually he was reunited with his adopted sister Queen Laura, and through her became an honorary member of the royal household.

Vincent was born in Hiberia in 161 AYZ to Edith Apothik. He was her second child, being preceded by an older brother named Oscar. Vincent's parentage is uncertain, though it is assumed his father was Giorgio Bacci, who married his mother while she was pregnant with him.

Giorgio and Edith became involved with the Cult of Vormund when Vincent was still an infant. When Giorgio lost his job, he turned to another cult member, Kirk Callow, for help. Kirk allowed the family to stay with him at his pawnshop. Giorgio had a drug problem and, after some "friends" of his trashed the shop, Kirk threw him out. Edith followed him, taking her children with her.

By 164, the family was living in the sewers underneath the city. Giorgio was often absent for extended periods of time, enough that he considered himself estranged from his family. Without his knowledge, Edith and Oscar fell ill and were quarantined by the sewers' other inhabitants. Vincent, being a small child, went with them.

Dagda Vormund arrived in Hiberia along with several of his closest followers. Hearing of Giorgio's state, they went down into the sewers to help. There they found Edith had died, Oscar was dying, and Vincent was sick with a fever. They brought them back to Kirk's shop and attempted to nurse them back to health, but Oscar didn't last long. Vincent survived, but was left blind by his illness.

With Giorgio's mental health deteriorating as a result of his addiction, he abandoned Vincent, never to return. Kirk took care of the infant boy, and the two departed Hiberia with the cult. When the cult was arrested by the Rhinehart police, Kirk was shot while carrying Vincent in his arms. Mortally wounded, Kirk gave Vincent to Anna Hoole.

Anna took Vincent to the city of Tyr, where she left the boy in the care of Lord Gavin Zosimus. Gavin made Vincent his ward and raised him alongside his own children, including his daughter Laura, stepdaughter Melanie, and son Balian. 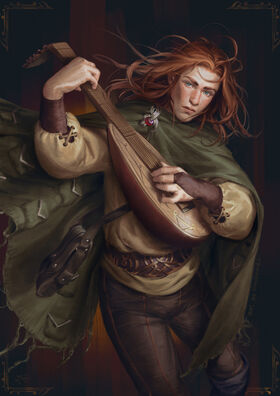 Vincent was separated from the rest of the Zosimus family after their home was raided and burned by Aldous' men in retaliation for Gavin's actions in the War of Succession. Once it was discovered that Vincent was only Gavin's ward, and blind at that, the soldiers seemed to take pity on him and he was permitted to go free - though his captors were certain he would not survive long in the wilderness, given his disability.

But Vincent did survive, eventually making his way back to civilization. He begged for food and money, then began to sing, his voice and songs (often of his own composition) being popular among the locals, who would give him coins, one for each song he sang. Eventually a kind stranger gave him a lute to accompany his singing.

It was in this state that he was found and brought before Queen Laura; his red hair having grown long, his clothes dirty and his cloak ragged and torn, clutching a lute in his arms as if it were a child that needed to be cradled close. She spoke to him, revealing her identity, and they embraced. Laura immediately provided him with a room in Carthmere, where servants attended to his every need. When the king questioned who he was and why he was being treated so well, Laura lied and told him she had hired him to be the new court minstrel. Aldous was skeptical at first, but soon warmed up to Vincent, enjoying his music.

After the end of the Fifth Exekian War, Laura engaged in a romance with Vincent. It is strongly implied that he is the father of her daughter, Princess Eleanor.

Vincent is described as a slender young man with ginger hair and blue eyes. He is handsome, with fine features and an easy smile. While he has some difficulties due to his blindness, he has learned to adapt.

Community content is available under CC-BY-SA unless otherwise noted.
Advertisement